I was doing some math (adding on my fingers and toes) and figured out that if I only do two previews a week, the Cotton Bowl will be well over by the time I'm finished. So, expect me to ramp things up next week with previews on Monday, Wednesday and Friday. I'm going to be very busy this weekend.

I'm not sure how I should feel about this, but I just noticed that the only friends I have on Facebook are dudes ("Is this bad?" - In Will Ferrell voice). Not that there's anything wrong with that and I'm happily married, but I just can't believe that there is only one female reader of DTN and Facebook participant (shout-out tesi15). 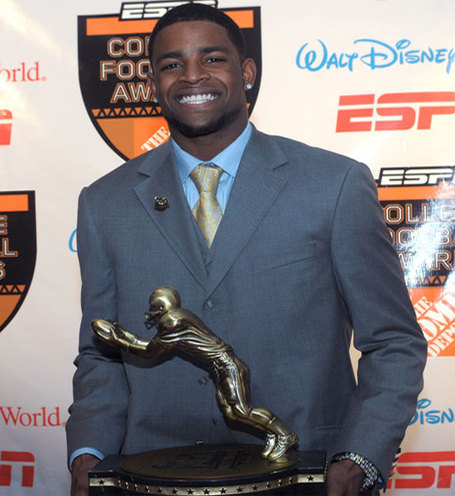 "It’s a new year. It feels like a new award,’’ he said. "I had the same excitement as last year. It felt like I was surprised again.’’

"Graham, I feel sorry from him,’’ Crabtree said. "I think he should have won at least something. He worked as hard as I did this summer. There’s nothing we could do about it. I told him, ‘We’ve got to try to move forward, try to blow this next team out and prove that we’re better than people think.’’

I didn't watch the awards show, but from LAJ's Don Williams article, Crabtree had a pretty funny comeback when ESPN's Chris Fowler was interviewing him on stage:

A camera caught ESPN’s Fowler, stationed on the Jones AT&T Stadium sideline, slack-jawed as the play unfolded. He was only a few steps away as Crabtree spun free from a Texas defender at the 5-yard line and dashed into the end zone.

Crabtree had some fun during his onstage interview with Fowler.

"I didn’t know what to expect (on that play),’’ Crabtree told Fowler. "The only part I remember about that is you on the sideline with your mouth wide open, man.’’

Another big congratulations goes to left tackle Rylan Reed who, along with Michael Crabtree, was named to the Walter Camp 2008 All-America Team. There may be no one more deserving than Rylan Reed being named for on this team. I'm sure that most of you know this, but Rylan is an incredible story: pitched minor league baseball, beat cancer, lost his father in an automobile accident, and has become one of the all-time best offensive linemen at Texas Tech.

A hearty congratulations to Michael and Rylan!

LAJ's Don Williams writes that Texas Tech quarterback Graham Harrell should be in New York for the Heisman Trophy ceremony. Here's Harrell on what motivates him:

Rivals.com's Tom Dienhart editorializes that Graham Harrell should have been invited, while CBS Sportsline's Greg Doyel writes that the voters are naturally biased based on where they live:

This is historical fact.

That's in the Southwest.

Rivals.com's Chip Brown summarizes the Big 12 as well as hands out post-season awards and looks ahead to 2009, while Rivals.com also named their 2008 All-American Team, which included receiver Michael Crabtree on the first team and guard Louis Vasquez named to the second team.

"It was a good high school get for us, number one," Tech head coach Pat Knight said. "To get a kid with that size and not be in junior college, we’re going to have him for four years instead of only two.

"We brought him along a little slowly, but now you’re going to see we’re going to start throwing him more and more into the fire. A lot of that had to do with confidence. It’s like these quarterbacks in the NFL — you don’t want to just throw them in there and if things don’t go well it affects their mindset."

And Lewandowski on what he thinks his job is:

"I’m not going to go in there and score 20 points a game. My job is to play defense, get some rebounds and clean up the boards."

That's a good attitude to have.